A complete guide to Arbitrum One

To better understand this blog, you should master the basic concepts of Ethereum first.

What is Arbitrum One?

Due to limitations on transaction throughput on the Ethereum Mainnet (i.e. layer 1), developers proposed layer 2 protocols to handle transactions off layer 1 so as to improve Ethereum’s performance and user experience.

This article will focus on Arbitrum One, and if you are interested in Arbitrum Nova, click here to learn more.

How does Arbitrum One’s solution work?

Arbitrum is a L2 protocol which guarantees that the data posted to layer 1 is valid through multiple-round interactive Optimistic Rollup.

The validator and the challenger continuously split the disputed part in a dichotomous way off-chain until the the dispute is narrowed down to a specific part, and then go to layer 1 to resolve it.

By using a multi-round interactive design, Arbitrum One can efficiently resolve disputes on layer 1 at a low cost.

Open your ETH wallet then click “Ethereum” at the top. Choose “Arbitrum” in the pop-up to switch to the Arbitrum One wallet for transferring, receiving, and trying out the DApp. 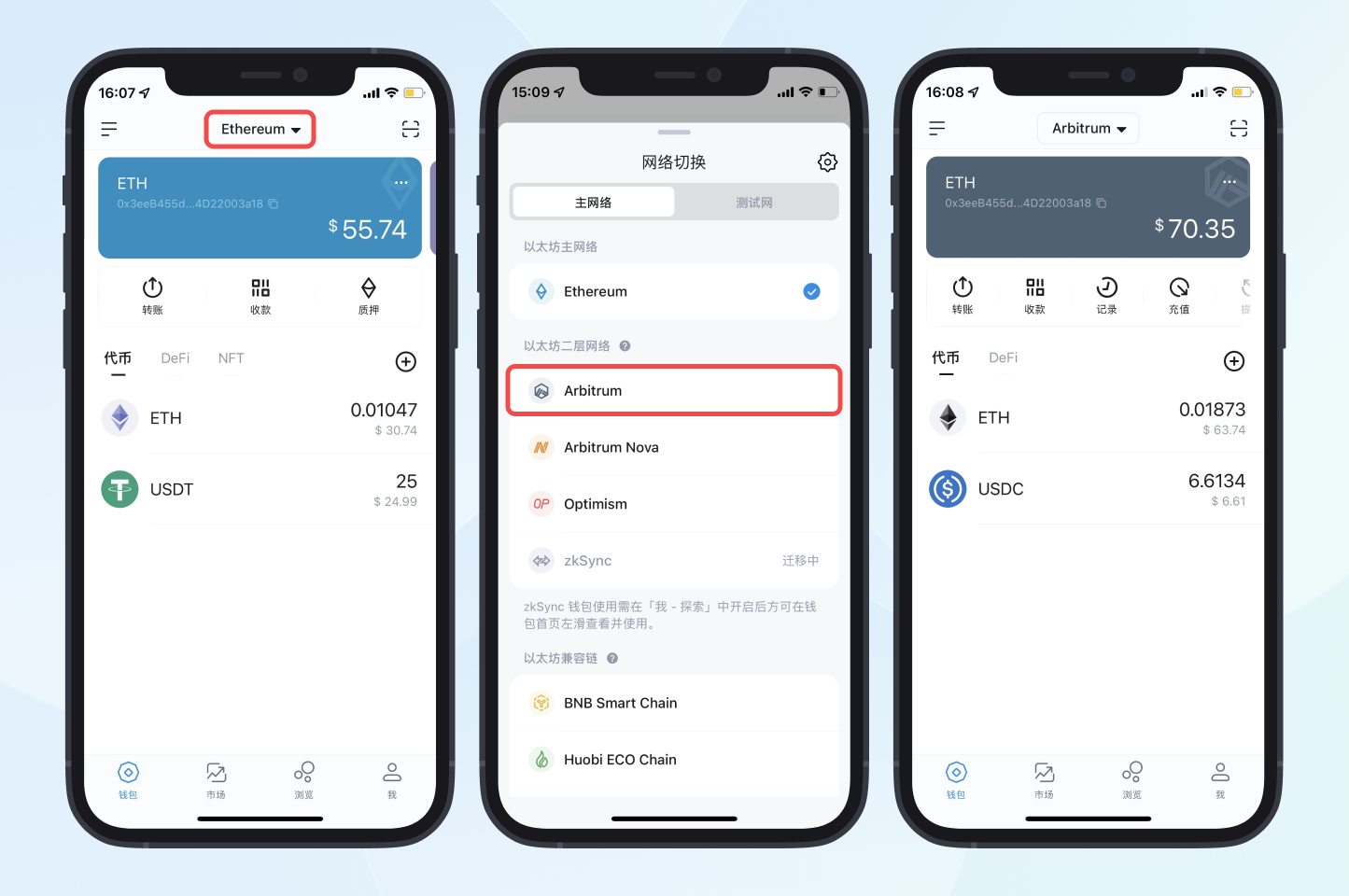 Learn more: How to use Arbitrum wallet on imToken

In order to scale Ethereum to accommodate a growing number of users, developers have proposed 2 solutions, namely, layer 2 and sharding (a layer 1 scaling solution).

Layer 1 refers to the Ethereum blockchain itself, and layer 2 is a network or technology that operates on top of Ethereum to improve its scalability and efficiency.

Rollup is a collective term for solutions designed to improve the performance of the Ethereum mainnet by handling transactions off-chain while keeping part of the data of each transaction on-chain.

There are two main types of Rollup solutions: ZK Rollup and Optimistic Rollup.

ZK Rollup is a layer 2 solution that uses zero-knowledge proof, but it is not EVM-compatible and takes a long time to generate zero-knowledge proof. So Optimistic Rollup was proposed in June 2019. In this scheme, zero-knowledge proof is removed, however, a penalty mechanism is added to ensure data security (slightly lower than ZK Rollup) while supporting general smart contracts more easily.

Optimistic Rollup executes smart contracts through OVM (Optimistic Virtual Machine), which is full-featured and EVM-compatible. This means that developers can migrate DApps to layer 2 with just a few lines of code.

Offchain Labs, the development team behind Arbitrum One, is a blockchain startup focused on enterprise applications and based in New York City.

Its co-founder Ed Felten is a professor of computer science at Princeton University and former Chief Technologist of the Obama Administration. He founded Offchain Labs with three other co-founders in the fall of 2018.

Arbitrum One block explorer is an open source web tool that stays synchronous with the Arbitrum One network and allows you to view information about blocks, transactions, addresses on Arbitrum One.